Blakind, also called Bla, is the sole region moderator of the Semitic region, having joined in February 2020. Bla was one of the main three consuls of the former Roman Empire, alongside Marpas and Tala. He first started a town in Constantinople, which then merged with the Roman Empire, and became the city of Byzantium. He then founded Carthage, which was soon handed over to Sue152 who split away from the empire not long after. Bla then went on to found a short lived town in New Mastia, which eventually was gifted to Spain. Lastly, Bla went on to start a town in Caesarea Maritima, at present day Haifa. He remained there until the dissolution of the Roman Empire and the introduction of regions. Bla is more active on the discord than he is on the server, due to the overall inactivity of his region. Some of Bla's most notable builds include: The unfinished Templvm Plvtoni in Roma, many houses and utilities spread across Roma, the large Unireme ship found in Roma, the ruins of Byzantium and New Mastia, The (unfinished) port of Haifa, as well as the buildings and airforce of Delaware. 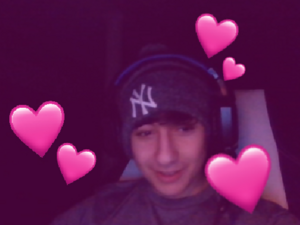 This image can be seen throughout the map, a sign of Blaist Cultists

With the introduction of picture maps, a cult has begun to form. This cult practices Blaism, a religion worshipping a picture of Bla taken by and edited by Heid via a discord call. There are several locations in which this picture can be located, most notably the Bla room in Haifa and lining the streets of Denmark. Some popular Blaists include: Soulful Fighter, Ukihoroa, and many more who are devoted to their lord and savior Bla.

Retrieved from "https://atwmc.miraheze.org/w/index.php?title=Blakind&oldid=757"
Category:
Cookies help us deliver our services. By using our services, you agree to our use of cookies.