From Around The World MC
Jump to navigation Jump to search
The German Empire (Deutsches Kaiserreich) or more colloquially referred to as Germany is a country within the West Germanic Region. It is situated between the Baltic and North Seas in Western and Central Europe. Germany borders The Kingdom of the Netherlands and the Kingdom of France to the West, the Republic of Italy and the Kingdom of Serbia to the south, Czechoslovakia and unclaimed West Slavic region to the East, and the Kingdom of Denmark to the North. The capital and most populous city of the German Empire is Berlin.

The German Empire was officially founded by Heid in March 2020. The German Empire, or known in those times as Deutsches_Reich, was a collection of a few towns such as Berlin the capital, and Hamburg, however overtime the empire grew. Heid moved onto Korea, and Nils Trinity became the new Kaiser. Land disputes between Germany and Denmark (known as the Fehnmarn Dispute)caused hostilities came to fruition as the German empire annexed islands off of the danish coast. By May 2020 the empire controlled all of modern day German borders in addition to land in Norway and Russia. A proposed merging of Germany and the Roman Empire was not passed, as Germany reached its full extent. Kaiser Nils became inactive as the German community reached a peak and slowed to a halt by summer 2020. The city of Königsberg was established by Monke, and after his banning the city was destroyed. The empire collapsed completely with the implementation of the regions system.

Very little progress occurred in Germany between summer and fall, and no major political events occurred within Germany’s borders. Due to Germany’s inactivity, the city of Frankfurt was chosen in July 2020 to the the capital of the European Union, however Calmaria was decided upon instead. _Lastar became the new mayor of Berlin in this time period and renovated the city, nearly doubling its size. Heid founded the town Skaghavn and the empire of Skandinavia, and the lands of Germany were formally integrated into the Skandinavian Empire until the implementation of regions which dissolved the empire. SugarcaneCadaver started to build in Austria specifically the city of Vienna, while Datchisan made a side project in Werfenweng, and 0xygin joined the server, and started building Frankfurt. The Rhine Crisis on November 16, 2020 where parts of the river were sabotaged by being covered with dirt, led to a need for a stronger political entity within Germany. Datchisan started building Munich in late November 2020, establishing a state in Bavaria which later merged with Austria to form the Kingdom of Austro-Bavaria.

On December 2nd 2020 Letterbomb0121 established the German Empire (Deutsches Kaiserreich), with its capital in Berlin, marking the largest political entity in the region since the original German Empire. On December 4th 2020, Germany was admitted into the European Union, the first multi national organization Germany was a part of. December 6th 2020, Austro-Bavaria merged with Germany, and later on December 7th 2020, the German half of Switzerland (Liebchtal) joined the empire as part of Baden-Württemberg. After the founding of the Empire, the German community on the server saw a boom, as Germany became the most active nation in Europe in January. It would then also become the most active nation in the world by some standards in February. In August 2021 Czechoslovakia claimed part of Austria, causing Datchisan to think about making Austro-Bavaria again, and then He decided to merge Bavaria, and the rest of Austria with Czechoslovakia forming Austrobavaroczechoslovakia (ABCS). Germany does not recognize the claim of Bavaria by ABCS. 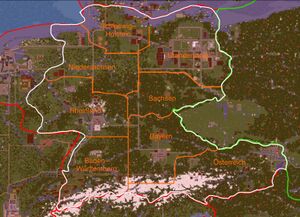 The administrative map of the German Empire

*Bavaria is a Disputed Territory

Culture within the German Empire differs by administrative region, however overarching similarities tie them together as German.

Retrieved from "https://atwmc.miraheze.org/w/index.php?title=German_Empire&oldid=1334"
Category:
Cookies help us deliver our services. By using our services, you agree to our use of cookies.