Around The World MC (i.e. ATWMC, IP: aroundtheworldmc.net, Discord) is a Minecraft and Discord community for language learners and those interested in linguistics. 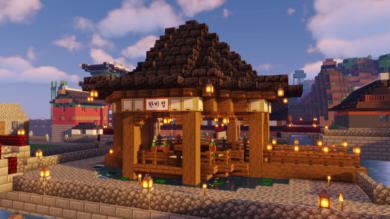 The Hanmijeong Pavilion in Seoul, Korea

ATWMC aims to build a community for players to practice learning languages through communicating with one another. The ATWMC community is welcoming to language learners of any level. The community has learners and natives of various languages.

According to the 2021 ATWMC Demographic Survey conducted by Jontiben, the most common languages being learned are French at 12.4%, Spanish at 11.1%, German at 10.5%, Japanese at 9.8%, English and Mandarin at 5.9% each, and Korean and Dutch at 3.9% each. Although most members are native English speakers, 31.3% percent of the playerbase does not speak English natively, and the most common native language besides English is Dutch at 5.3%.

The most common country of origin is the USA at 46.8%. Other somewhat common countries of origin include the UK at 9.7%, the Netherlands at 6.5%, and Poland, Germany, and Turkey individually at 3.2% each.

Males reportedly take up the majority of the playerbase at 76.6%, while females take up 18.8%, and 4.7% of the playerbase identified as other. However, the amount of female players has increased by nearly 5 times since mid-2020.

Retrieved from "https://atwmc.miraheze.org/w/index.php?title=Main_Page&oldid=1328"
Category:
Cookies help us deliver our services. By using our services, you agree to our use of cookies.