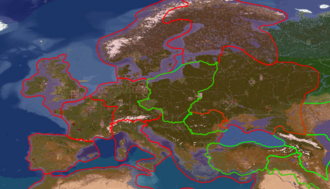 Europe as seen from the Dynmap. Includes the various European regions.

The Earth Map, or Earth World, is the current primary gameplay world on the Around the World MC Minecraft server, replacing the Old Map. The map is a 1:1000 scale recreation of the Earth, created by earth.motfe.net. It was officially added to the server on January 20, 2020 by Jontiben. The goal of the map was to soft-reset the server, boost player activity, and to have a map that better reflects the language learning aspect of the server. As of January 12, 2021, the Old Map was removed from the server, making the Earth Map the only gameplay world. 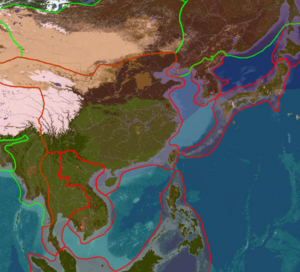 East, Southeast, and Northeast Asia as seen from the Dynmap. Includes the various Asian regions.

Retrieved from "https://atwmc.miraheze.org/w/index.php?title=Earth_Map&oldid=1343"
Category:
Cookies help us deliver our services. By using our services, you agree to our use of cookies.