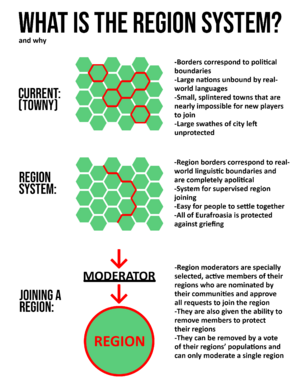 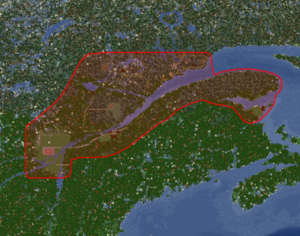 Regions are a feature used to divide land among the playerbase to better protect people's work. The region map was created by Jontiben and Soulful_Fighter, initially for the New Map, but has been applied to the Old Map as well. There are hundreds of regions across the entire server, and there are regions placed in every single world within the server. In the New Map, regions are used to divide land based on language families.

Regions are not to be confused with countries, as regions are solely to divide land among linguistic boundaries, whereas different countries have different governments.

Regions tend to have to coincide with the locations of which languages are spoken in real life. For example, the Iberian region is located on the Iberian peninsula for the Ibero-Romance languages, such as Spanish and Portuguese. If languages are realistically spoken in areas they are not indigenous to (e.g. French, Russian, Spanish, Portuguese), the allowance of regions or the spread of larger regions over areas as non-indigenous languages is vastly limited. The Americas are purposefully left mostly void of regions due to the demand of restricting colonial languages in areas they are not indigenous to. There are few exceptions to this rule, such as Quebec (French), Cuba (Spanish), and Fortaleza (Portuguese). If a language is spoken at a very minor degree or is dead and is encompassed by the origins of much larger languages (e.g. Gothic), that language is instead put into the larger region that encompasses it. If there is an area in which there are small language families (e.g. the West Slavic region) or has a language family spoken significantly in an area in which that language family is also spoken in another area (e.g. the Central Asian region), a new region is created there.

The regions are typically composed of a family of languages, or just a single language isolate in which the learners and natives of the language can build and develop alongside one another.

Retrieved from "https://atwmc.miraheze.org/w/index.php?title=Regions&oldid=1291"
Category:
Cookies help us deliver our services. By using our services, you agree to our use of cookies.